In his message today, our pastor read this verse:

When the eight days were completed for his circumcision, he was named Jesus  — the name given by the angel before he was conceived. -Luke 2:21

His message had nothing to do with expounding on the significance of circumcision, but a question came to my mind: Why eight days?

So I looked it up, and here’s part of one incredibly interesting article I came across on apologeticspress.org:

Genesis 17:12, God specifically directed Abraham to circumcise newborn males on the eighth day. Why the eighth day? In 1935, professor H. Dam proposed the name “vitamin K” for the factor in foods that helped prevent hemorrhaging in baby chicks. We now know vitamin K is responsible for the production (by the liver) of the element known as prothrombin. If vitamin K is deficient, there will be a prothrombin deficiency and hemorrhaging may occur. Oddly, it is only on the fifth through the seventh days of the newborn male’s life that vitamin K (produced by bacteria in the intestinal tract) is present in adequate quantities. Vitamin K, coupled with prothrombin, causes blood coagulation, which is important in any surgical procedure. Holt and McIntosh, in their classic work, Holt Pediatrics, observed that a newborn infant has “peculiar susceptibility to bleeding between the second and fifth days of life…. Hemorrhages at this time, though often inconsequential, are sometimes extensive; they may produce serious damage to internal organs, especially to the brain, and cause death from shock and exsanguination” (1953, pp. 125-126). Obviously, then, if vitamin K is not produced in sufficient quantities until days five through seven, it would be wise to postpone any surgery until some time after that. But why did God specify day eight?

On the eighth day, the amount of prothrombin present actually is elevated above one-hundred percent of normal—and is the only day in the male’s life in which this will be the case under normal conditions. If surgery is to be performed, day eight is the perfect day to do it. Vitamin K and prothrombin levels are at their peak. The chart below, patterned after one published by S.I. McMillen, M.D., in his book, None of These Diseases, portrays this in graphic form. 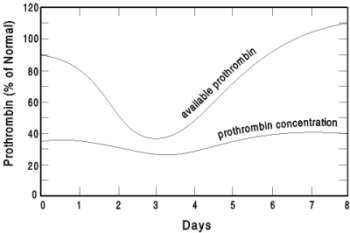 We should commend the many hundreds of workers who labored at great expense over a number of years to discover that the safest day to perform circumcision is the eighth. Yet, as we congratulate medical science for this recent finding, we can almost hear the leaves of the Bible rustling. They would like to remind us that four thousand years ago, when God initiated circumcision with Abraham….

Abraham did not pick the eighth day after many centuries of trial-and-error experiments. Neither he nor any of his company from the ancient city of Ur in the Chaldees ever had been circumcised. It was a day picked by the Creator of vitamin K (1984, p. 93).

Moses’ information, as recorded in Genesis 17:12, not only was scientifically accurate, but was years ahead of its time. How did Moses have access to such information? The answer, of course, is provided by the apostle Paul in 2 Timothy 3:16—“Every scripture is inspired of God.”

When he finished teaching, he said to Simon, “Push out into deep water and let your nets out for a catch.”

If you’ve read the Gospels, you are familiar with this story.  Simon and his coworkers had been fishing all night and caught nothing.  Then Jesus tells them to do this.

Using that deep water thought, what area of life might God be telling you to push out?  What if He knows something you don’t and all you have to do is respond like Simon, “If you say so”?

Why not consider the possibilities where God is offering to guide you?